The teachers making a difference trip to Ireland was an eye opening trip for all of us. For me, it was the first time to be out of my country, and first time in another country. And to be honest, I experience two types of extremities. I experienced extremes of weathers from very hot and dry conditions in Uganda (in January) to very cold and wet conditions in Ireland (winter). I also experienced extremities of technology, the poor use of technology in Uganda and advanced use of technology in Ireland.

The Republic of Ireland, like most of the countries in Western Europe, has a very developed and efficient public transport system. There are trains that connect major towns to Dublin, the capital and travel every hour at fair price. At the train stations, tickets are accessed using Automatic Teller Machines (ATM). To access a ticket, users have use the touch screen to select the departure station and destination station, then it prompts the user to insert money (small denominations of Euro like 5 euro, 10 euro). The machine then processes the tickets and outputs the ticket plus any balance, if there is any. The user get the ticket, goes over to the passage gates, push the ticket into some slot and the gates open for you to pass. This has to be done by everyone, because without the tickets, one cannot access the train boarding area to enter the train. These tickets are also revalidated at the destination station, where commuters have to pass it over access gates again, so they can leave the train station.

Dublin, the city of Wi-Fi.

Unlike Kampala that has a few private wireless internet connections, Ireland has thousands of Wi-Fi spots. Train stations, public parks, trains, trams, restaurants, hotels, cafés, shopping arcades, schools, universities and government buildings all have Wi-Fi. At the main street of Dublin, there are over 30 Wi-Fi spots, and every other street has almost the same number.

Because of the harsh winter weather, most public buildings have automatic doors on the outside and push or pull door on the inside. This means that when entering a building balcony, the door automatically opens as you come closer to it.

Most public places also have surveillance cameras, and it is easy to understand why the Irish people value the last bit of privacy that they still have. Taking still photos and video is strictly regulated and one has to obtain consent, if people will be involved. 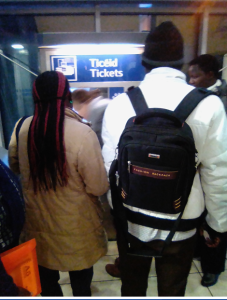